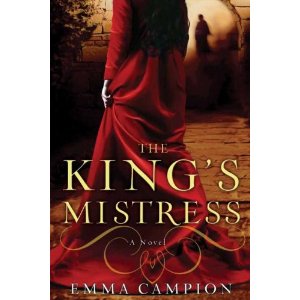 Daughter of a wealthy London merchant, Alice catches the eye of Janyn Perrers and the two marry despite her mother’s rather irrational objections. The marriage is definitely a love match, but Janyn and his mother have a deep dark secret that has something to do with the dowager Queen Isabella and while it has brought them great wealth, it also brings great danger to those who keep the old Queen’s secrets.  When Janyn mysteriously disappears (no spoiler, that’s on the book jacket) Alice seeks protection of Edward III and his queen, Philippa.  A commoner, the noblewomen at court shun her, but the Queen loves Alice’s knowledge of clothing and fabric, and as for the King? I’m guessing the book’s title will indicate to you where the rest of the story goes, no?

If you are familiar with the period you know what happens next and if not you don’t want me spoiling it for you.  While I appreciated the author’s effort to portray one of history’s most vilified women in a more favorable light, I think she did herself a disservice by doing a complete 180 and turning Alice into something a wee bit too sugary sweet. Would someone with her business acumen really worry much over a profitable wardship offered by the King because people might think ill of her? The first person narrative (admittedly not my favorite) doesn’t help much either and I felt the author painted herself into too many corners trying to justify events so that all the bad things that happened were always someone else’s fault. I’d rather see a more well-rounded character, warts and all.

As for the story and pacing itself? IMHO too much time is spent on Alice’s marriage with Janyn, along with all those pages upon pages of oohing and aahing over the fabrics. I would have liked to know more about the merchant’s role in purchasing and marketing cloth rather than hearing about the next pretty dress and headdress. Better yet, fast forward to Alice entering the royal household and then give us a few flashbacks to flesh out the back story.  I also found myself scratching my head when the Big Mystery is finally revealed, why anyone would be so hell-bent on murder because of *that* I can’t quite fathom.

In the end, this was on OK book, good but certainly not great, with very little character development and far too much telling instead of showing. Since the story is told from Alice’s point of view and she’s not always in the thick of things some of the more important events in this period are skimmed over a bit too quickly, i.e. the Peasant’s Revolt was over and done with in three pages. Kudos to the author for attempting to shed new light on such a heinous woman, but in the end just too much sugar for my tastes. 3/5 stars and I recommend getting it from the library first and then buy it if you love it.