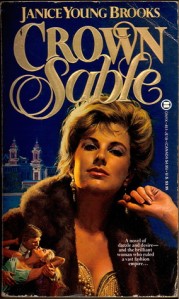 New York, early 1900’s. Polish immigrants Irene Kossock and her brother Teo arrive from Poland (the rest of the family to come later) and she’s promptly dumped into the *care* of the Spry family while her brother leaves for parts unknown. The Sprys find ample use for Irene’s skill with a needle and despite their neglect she blossoms into a beautiful woman – and one who catches the eye of fellow immigrant and scholar Peter Garrick. The two eventually marry happily, but Irene has an unquenchable desire to better their lot in life and jumps at the chance offered by furrier Jacques Neptune who admires her skill at design and needlework. Jacques takes her under his wing and teaches her the ropes, and at the same time builds an image of Irene more suitable to the place in society he plans for her – but at what cost to her marriage? Is all that prestige and power more important than that handsome husband and hearth and children?

Irene’s story takes plenty of twists and turns and ups and downs until it finally culminates at the end of WWI, as Irene must decide what is most important in life, husband and family or wealth and career. Despite what the cover might indicate, Irene is a very strong, forthright and faithful heroine, you aren’t going to find her hopping from man to man and bed to bed (well, there’s one lapse but I forgive her). She’s not a bitchy, power mad Alexis Carrington out to destroy everyone in her path, just a woman wanting more out of life for herself and her family. I really cared about Peter and Irene and was kept on pins and needles until the very end. I especially liked the added touch of the extended family invading them from Poland, especially mama Zophia (she did not want to give up her chickens ever).

There are a lot of details of the ins and outs of the fur trade and I’d warn those who are a bit too  sensitive on the topic might want to stay away.  This is the third novel I’ve read by this author and they’ve all been solid four star reads, with strong female characters and despite what some of the covers might indicate the sex is very very tame. Her writing is solid and the characters and settings believable. There was a bit of exposition at the end, but I don’t see how she could have recounted the events of a war from another continent from where her MC was located at. 4/5 stars.