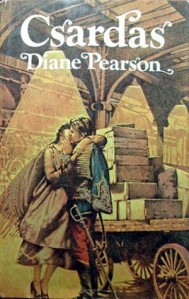 Portions of this review will discuss events that are historical fact. I have made every effort not to mention the fates of specific characters in relation to those historical events.

Csardas begins in 1914 and focuses around the lives of the two Ferenc sisters, Eva and Amalia (Malie), daughters of a Hungarian aristocrat and a wealthy Jewish banker, who expect little more out of life but parties with dashing young men to court them. Self-centered Eva is determined to snare the wealthy Felix Kaldy, but his mother is having none of it (a Bogozy is not good enough for a Kaldy). As for Malie, she meets young officer Karoly Vilaghy and both are head over heels in love, but her father forbids the match with someone of lower social standing (they are Bogozys after all). Malie defies her father and insists she’ll marry Karoly, but war happens…

The story continues through the aftermath of WWI and the country trying to regain what it lost, the oncoming threat of Germany and Adolf Hitler, the German invasion of Hungary, and trying to rebuild a life and land after the decimation of war.

You think, because people must be fed, we should throw away our consciences?”…”Conscience is the privilege of those who are not hungry.” 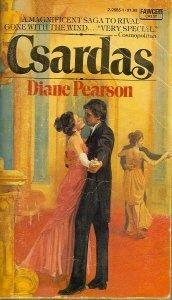 I highly recommend this novel for those interested in Hungary and its history, but be warned, war is not pretty and while there aren’t graphic battlefield scenes there are some serious topics covered and this might not suit for every reader. The jacket blurb does make this sound like a romance novel revolving around a pair of star-crossed lovers, but it’s anything but that. What you will get is a story of a family and how their lives are affected by war and politics. You will get an up close look at the lifestyle and customs of their tightly woven society, from the wealthy and privileged to the peasants born and bred to accept their lot in life. Until the Soviets come that is…

As for the title of the book? According to Wik Csárdás is a traditional Hungarian Folk dance and you can spend all day on You Tube listening to different variations. So far this one is my favorite,

3 thoughts on “Csardas by Diane Pearson”