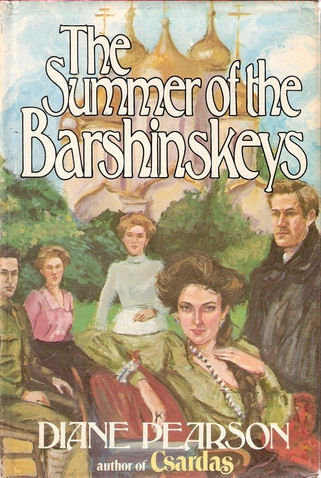 1902 was the summer when the Barshinskey family came to their small English village and forever changed the Willoughbys. The Willoughbys might be servants, but they are at the top of their social class and the Barshinskeys are at the very lowest rung, little better than tinkers with the children filthy and barefoot.

Mr. Barshinkey is Russian, and while a crude, coarse man with a fondness for drink, he has a way about him that charms – and the Willoughbys are no exception (well, maybe Mrs. Willoughby is immune). The Barshinskey family is scattered by death and violence, and two of the children stay behind and in touch with the Willoughbys and they begin their adult lives as tensions in Europe are ready to explode into war.

Edwin Willoughby has a new life and good job in London, until he catches sight of Galina, the oldest Barshinskey daughter, and it’s not long before she seduces him into her world of theatre and rich lovers. Galina is a master of yanking Edwin’s chain (well, I could use a coarser word, but you know what I mean), and he follows her and her wealthy lover to Petersburg and things go from bad to worse and he’s soon trapped in a world gone mad and not just himself in need of saving.

He didn’t answer. He felt sick and ashamed. Men were dying all over the world, fighting for their countries, and he was wasting his life trying to save this selfish, thoughtless, totally useless piece of humanity. 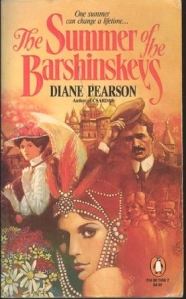 Personally, I’d have dumped the witch and high tailed it out of there, but  love conquers all, eh? While some of the plot description might make it sound like this is an action-packed type of novel, it is anything but. The bulk of the story takes place in the countryside, and involves those of the lower classes. No Lords and Ladies to be found here, so if that’s your cuppa tea this book probably won’t suit. That said, the writing is excellent and I especially liked Sophie’s voice in the first third – you really do feel like you are seeing the world from her eleven year old POV and not an adult writer forcing it on you. The latter part of the book is written in third person and you’ll get not only Edwin’s story in Russia, but that of the younger Barshinkey daughter as she joins the Quaker relief effort in Russia and hopes of finding Edwin and bringing him home. A good solid read for me, and one I’d recommend for those interested in the period.

2 thoughts on “The Summer of the Barshinskeys by Diane Pearson”