Crown of Fire picks up immediately where Lords of the East left off, as Marianne and her merry band of loyal friends take the long road to Moscow so she can warn Napoleon of a treasonous plot against his Russian campaign. Once in Moscow, they find the city in panic and the citizens fleeing at the word of the Emperor’s approach. Separated from the rest of their group, Marianne and Jason cross paths with old foe Count Chernychev. Male egos and tempers fly and the two men duel, with Jason landing in the clinker (no spoilers, that’s on the jacket) and Marianne’s left to shuffle for herself – and just like a cat she always (well, almost always) lands on her feet.

The embittered Moscow residents plan to burn the city to the ground rather than yield it to the invading army, and let’s just say that our heroine definitely jumps out of the frying pan into the fire this time. Even if she can escape the burning city, there’s still a long road to travel as Russia’s deadly winter begins its bitter grip on the countryside – there’s little food, the horses are dying and plenty of marauding Cossacks are bent on revenge against all things French. Plus there’s still a very ticked off  Napoleon somewhere on the road behind her (and when she ticks him off she doesn’t mess around ;)).

Will our heroine survive this latest peril? Will Napoleon strangle her when he gets his hands on her? Will Jason escape prison and search for his beloved Marianne, 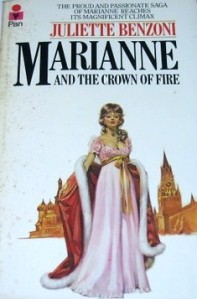 or will he continue to be the jealous jerk he’s been in the last two books? Will Marianne finally get over her blind devotion to Jason, wake up and smell the coffee and realize where her true destiny and happiness lies? Gawd, I sure hope so.

This was just as much fun as the previous books in the series, although I am glad it’s finally over – a person can only take so much high adventure, returns from the dead, near misses and emotional turmoil – and all of that before she hits her twentieth birthday! There were a couple of things I wish had been resolved better instead of leaving the reader hanging wondering what really happened. We never

do find out what you-know-who was really up to in Russia, what happened to Dr. Leighton and Marianne’s missing jewels, nor the mystery of the diamond and the identity of the person who retrieved it. Perhaps there was another book written and/or planned that never made it to this side of the pond? All in all this series was jolly good fun and I do want to hunt down Benzoni’s Catherine series one of these days. These books were wildly popular in France and have been put to film. I found this clip from the first episode on YouTube,

The series in order,

What fun! This begins where Marianne and The Masked Prince left off with Marianne returning from her mysterious wedding to the Prince Sant’Anna of Tuscany and she’s now the toast of Paris society. Whilst attending a grand ball given by the Austrian ambassador, Marianne meets old friend Jason Beaufort and this time the light bulbs go off (finally) and she realizes he is the one man for her until death do they part – but you know there’s going to be complication or two, don’t you?  The ball quickly turns to disaster from a poorly placed candle and Marianne, along with the rest of Parisian high society, are scrambling for their lives and she’s definitely in need of rescuing. Will it be Jason or Napoleon? Or perhaps the handsome Russian?

With Jason currently unavailable (can’t tell you why) Marianne moves on with her life and accepts the attention of Russian Count Chernychev – although she may have bit off more than she can chew with this flirtation. After quite a busy night with comings and goings in and out of her bedroom window (another return from the past, an assault and a duel!), Marianne is tricked into believing Jason is in dire danger and only she can save him, but is it all just a trick? Are there greater forces at work than merely the need for revenge against Marianne?

No, I’m not giving it all away, all of the above takes place in the very beginning. Marianne might be a bit too headstrong and stubborn for some reader’s tastes (I’m guessing she’s eighteen by now), and I have to admit wanting to slap her on occasion, but her scrapes and pitfalls are so much fun I don’t care. My favorite scene and picture a very stern, much annoyed Napoleon giving Marianne a dressing down for her latest escapade,

“You are a perfect menace Madame, and if I did not take good care you would disrupt the whole of my Grand Army altogether. If they’re not fighting duels over you, they’re killing people for you.”

Hehe. Benzoni does a great job setting her scenes and details, as well as placing her fictional characters in with real historical characters. A deadly fire, a kidnapping, wrongful imprisonment, rape, duels, a nail-biting escape from an impenetrable prison, you name it the book has it – and she still has to deal with that mysterious husband in Tuscany, as well as the ticked-off Emperor himself. The action starts from the get-go and never stops and frankly I wish I had the next one (Marianne and the Rebels) sitting on the pile waiting for me. Don’t let those racy covers fool you (I just love them), any sex you’ll find in this one is very very tame by today’s standards. The series order of those I have read so far,