Earl of Northumberland, John of Gaunt 1st Duke of Lancaster 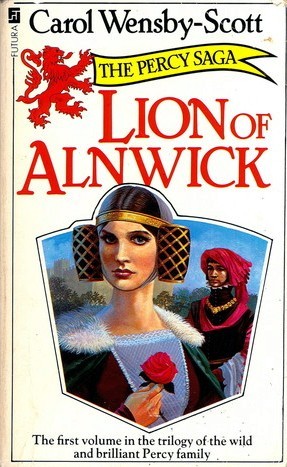 “If there were ever an English king of Scotland than there would be no Scotland. And remember, my fledgling lord, if there is no Scotland then mayhap there’ll be no Percys.”

The Lion of Alnwick begins in 1357 as young Henry (Hal) Percy should be at court focusing on garnering royal favor and the best positions, but he takes one look at Margaret and falls head over heels, despite her being a widow with nothing to bring to the marriage, and she’s a Neville to boot (gasp!). They wed, and happily, but Hal’s loyalty is to King Edward and his relationship with the Duke of Lancaster and his son-in-law John of Gaunt suffer because of it and tensions are…well…just a wee bit heated, and it becomes even more so as John eyes the succession while an aging Edward is more interested in his mistress Alice Perrers than governing the kingdom.

The latter part of the book covers the reign of Richard II (loved his portrayal here), and the continuing conflicts with Gaunt’s (now Duke of Lancaster) ambitions to either rule or be the puppet master behind the throne. Hal’s son Harry (Hotspur) has his own issues as he’s torn between his loyalty to his father and his childhood *friend* Henry Bolingbroke (Gaunt’s son) who may or may not have his own aspersions to England’s crown. And then there’s Hotspur’s devious, bitchy, grasping wife Elizabeth – but she is a Mortimer after all, what do you expect?

“So the white rose and the red rose come together! A charming bouquet, if it were not for the stink of intrigue.”

Confused? This is a complicated bit of history, but Wensby-Scott does an excellent job of putting it all together in a novel that is both highly entertaining and educational at the same time. This book finishes off after the battle of Shrewsbury (look it up and spoil at your own peril).

“A trickle of blood had dried and hardened on the rotted cheek-tears of blood, yet there was none left to weep for now.”

Book two is Lion Dormant and continues the story of the Percys and Nevilles and the events leading up to the Wars of the Roses. The third book is Lion Invincible and as I understand it covers the events leading up to Bosworth field. I loved her writing, especially the dialog. I still can’t decide who got the best lines, Hal, Lancaster or Elizabeth. Highly recommended and fairly HTF on the cheapish side, especially the last two. A huge thank you to Madame Guillotine by mentioning these on her blog or I’d never have come across them. Five stars.

10 thoughts on “The Lion of Alnwick by Carol Wensby-Scott”